If you don't know how to fix the country, please don't break it

If you don't know how to fix the country, please don't break it. Open your mind, face the reality and see what you have done now compare with the status from 40 years ago. Are you saying that you are doing for the sake of people? No. you are not. You are only building the destructed mechanism for my country. You are blinded with the glistering light of dimonds that you are stealing from your own people. You might thought that you are making good fortunes and reputations for your next generation with those dimonds, money and power that you have, but you are wrong. You are literally wrong. You are supposed to be like a father to look after your people because you are the leader of million of people but you just turned your face away. What's it in your mind? What are you thinking? 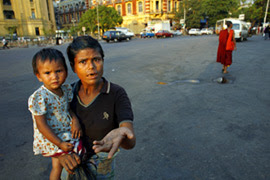 
When I was young and old enough to understand the love and affection between mother and child, I saw a cow looking for her young calf with full of tears in her eyes. The calf might have somehow lost his way back home, and so mother cow went out and calling out for her child at every corner of the streets. She finally made sure that her child was safe and happy under her protection. At least, she felt something and has affection for her own child.

So, how is yours? Can you protect us? Can you make your people to be proud of being the citizen of Myanmar? My country is suffering. My people are dying with povety. I know you are such a stubborn or afraid one to face the true reality. What make you think that you can do better than others? You can't even approved your capabilities to build up the better country during past 20 years except increasing number of homeless, poverty, prostitutions, jobless, lower income rate, higher living costs. If you are afraid, tell me what you are afraid of. Are you afraid that the other people might say the true factors, and they will tell you that the things you are doing are wrong? Are you afraid that the people of Myanmar will get educated and bring the authetic visions for the bright future of the country? Do you know that the majority of your people are living in the dark world where there are no foods, no proper education, no shelters, and they are suffering? I will tell you what I am afraid of. I am afriad that my country will never able to stand up again as before because of what you had done, but I put my faith in my people for the good changes. I am sure they truly will.

Please don't tell me that our country is declining because of people. Please don't project us. We are your people. We are just ordinary citizens living within your military framework. I don't say the term "military" is evil thing, but just that you are not providing us the basic human needs. Please take your full responsibilities, otherwise let someone else take it.

Do you think this is going to last forever? Do you think you can shut down the gate of truth and reality with your military might? I don't think so. Did you ever ask yourself just like a child without having smeared influences why there are so many poverties in your country, and your people are dying in hungers and diseases while your families are celebrating birthday parties. Why? Why? Why? You are the leader of the country. Did you ever try to find a solution for those thousand of people who are dying under your dictatorship? What can you do for my country? If you can not do, what can I do for my country? What other people can do for the country? Do you need help? If you need help, just ask. It is just pretty simple. You need to accept the fact that you can not build the country alone. You also aware that Aung San Suu Kyi and other brilliant political leaders can help and lead the country. I don't understand why you don't incorporate with them. You are either too stubborn or just a dumb leader.

I don't think you are doing a good job for the country. More than 40 millions people are living in the country but as long as all those 40 millions people are not well educated, I wouldn't say you are creating the proper education system for the country. If someone say, "hey! my children are going to school and they are learning computer at home". Of course, you idiot!, you can effort to send your children to good school, but what about the other millions of people who can't even make enough incomes to provide the daily foods for their family. I am not talking about your little cheesy world. I am talking about my people. my Myanmar people. for Everyone. the whole country. Don't say our education system is not so bad. You haven't seen the world. You haven't seen the superior education system which would train the children to become managers, leaders, businessmen and they will be on top of everyone. I want my child to become a manager, to become a leader. I don't want my child to work like a slave in other counties. What can you do for that?

I am a citizen of Myanmar, but I am not proud of myself for being a citizen of Myanmar. Evertime I travel to other countries, I have more difficulties than other nationalities. Do you know why? People thought that the people of Myanmar are inferior. That's the nature of human. I have to try so hard and struggle more than others to get better impression for being a Myanmar. Why can't Myanmar people instantly be well recognized for the good courses? Can you make the people of Myanmar to be superior? I honestly want to be proud of my country. I long the time when Myanmar used to be on top of other Asia countries, but you destroyed the reputations. Don't you feel ashamed of yourself when the world is watching you as a brutal and evil one.

I took a taxi the other day in an event that it was drizzling and I was also late for my work. After having a long silent ride in the cab, me and taxi driver started to strike a conversation. What amused me the most was that everytime I tell my identity for being a Myanmar nationality in my english accent, everybody got stunned. After explaining who I am and what I do for living in a diplomatic way, the taxi driver proudly revealed the secret he had done in Myanmar 30 years ago. I am even more stunned when he told me what he did in Myanmar during those socialist days in Myanmar. He was a business man and sold watches in Yangon. He did illegal watch trafficking in Myanmar. He was able to buy lands and houses in Singapore because of his business. Since Myanmar was under socialist government, it was illegal to import and sell watches in Myanmar as private own. He said if he pay a box of whisky bottles, he could easily pass through the custom and immigration counters at the Yangon airport. Airport authorities even let him sleep with the girls they detained from illegal trafficking business. Most of the girls were about 13 or 14 years old. He is a Singaporean and the girls he raped were Myanmar but helped by Myanmar authorities. What was going on? Who is going to protect us if Myanmar government can not protect our nationalities? Where is the law? Is the law literally exist in Myanmar just not to send the people into jail for saying what they believe, but for the protection of every Myanmar citizens?

Sometime, I truly wish there will be a internal corruption inside your military framework in order to break down the structure, and so somebody could take control over the existing military power and reform the whole country. A lot of people tremendouly sacrificed their lives, their families, their properties, their love ones while doing what they believe to get better living standard for the people of Myanmar. They believe democracy is the only way out for the country. I believe it too. Since your military system didn't work for the country, you have to accept or compromise the dialogue with the other political parties.

It is really funny to see you are fooling around UN, ASEAN and other countries. How long has it been since we had our genuine election? Wow..it's been almost 20 years now. How could that happen? Well.. obviously UN is weak, international pressure is weak, ASEAN is weak, but our people get killed occasionally one by one, group by group. Military regime made up every possible tricks, they cheated, they tell lies. It comes to the realization that only the people of Myanmar can change the future of Myanmar.